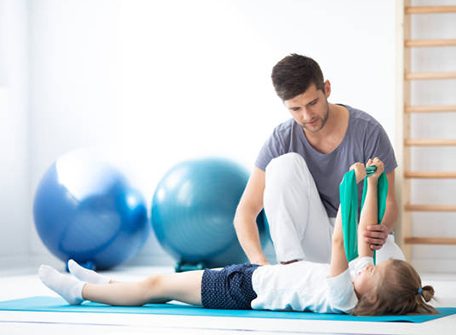 Does your child face difficulty rolling over or holding their head up? Have you noticed your child struggling to stand or sit on their own? Do they have trouble breathing?

If you have observed any of such symptoms in your child, he or she might have Spinal Muscular Atrophy (SPA).

Keep reading to learn about SPA, its types, symptoms, and possible treatment therapies!

What is Spinal Muscular Atrophy (SPA)?

Spinal muscular atrophy is a genetic neuromuscular disease leading muscles to weaken and waste away. This disease is quite common among children making it hard for them to use their muscles. Children with SMA lose a specific kind of nerve cell in their spinal cord (motor neurons that control the movement of muscles). Due to the breakdown of these nerve cells in the spinal cord and brain, the brain is unable to send messages that control muscle movements.

As a result of this health condition, muscles become weak or even shrink, causing trouble for children to control their head movements, sit on their own, or even walk independently. In most cases, children with SPA also struggle with breathing and swallowing as their condition worsens.

Though there is no permanent cure for Spinal Muscular Atrophy, with early intervention and intensive therapy, symptoms of SMA can be improved to help children live longer and independently.

To prevent the complications of SMA, various rehabilitation services can play their role. Some of the possible therapies to treat symptoms of SMA include:

Pediatric therapy also recommends using assistive devices like speech synthesizers, braces, supports, orthotics, and wheelchairs to help children enhance their independence.
Note: Always remember that each child with SMA has a different experience, and regardless of the severity of their mobility issues, their intelligence remains unaffected.